Posted on August 13, 2011 by paulhumphreysadventures

Really part 4. wow how time flies. I hope i can get these done. Robin & I leave on Sunday night for Colorado for 7 days, 5 of which will be spent climbing & hiking. oh well there goes some more adventures to share.

Anyway back to RTNX, where was i. Oh yeah Ice Creek lodge. So we left there not too long after BRATS & the French. We should have left with them, because what is about to unfold not only cost us about 2-3 hours but some heated conversations high up on a mountain.

often Race Directors send you purposely in an intentional direction because they want you to go a certain way. That could be because of permits they have/don’t have for land access (not that i think that was an issue out there), they want you to see some cool stuff or in the interest of time there really isn’t any other way to go. For this next section (remember, we are still on foot) i think it was see cool stuff and there really wasn’t any…

This meant trekking over 2 mountain passes. Already been over one, but these 2 were a lot higher and from the map a little more technical. And before i left i promised Robin i would come back alive and wouldn’t do anything stupid!!!! that got your attention didn’t it.

We plotted what we thought was a good route. We plotted the 2nd pass right, just as the Race Director had intended us to go. As for the 1st pass, we totally messed that up and lost all that time. We began by heading up a snow field that was relatively easy, and uneventful. Using only a topo map allows you to see how steep the terrain is and from what we looked at on the top our route choice was good. We got to the ridge line in a little pass about 9000ft i think and Peter, Chris & I scouted around to find ‘the way down’. What we didn’t know or were ever able to know that because of the large snow fall last winter the other side of the ridge (the side with all the snow) was HEAVILY corniced over. Which is a mountaineer term for massive overhang of snow and ice. Like a big frozen wave about to break. They extend out from the side of the mountain and are undercut beneath them. Along with being VERY dangerous to walk on as they could collapse under your weight. I recognized this immediately and being the one with the most mountaineering experience out of the 4 of us voiced my fear and disapproval at descending that way. Even though we did find a rocky way down that avoided the snow this to in my opinion was really dodgy too.

At this point we had a team conference, and for the sake of my team mates and my self i don’t need to share too many details, needless to say it was heated, and i wasnt going ‘down there’. ‘I promised my wife…& that isn’t safe’. Collectively we made the decision to go back to the lodge and ask the lodge owner for some local advice and have a do over. i will say we did all agree to this, it’s not like someone was being difficult. There were a few heated moments high on that ridge line. Remembering that its day ??? (i cannot remember at that point, and we have how much sleep?) Not many words were said on the way down. But it all worked out and we are good and processing things, talking them over and moving on. Oh the human/emotional side of AR, maybe you thought it was all sweat, mud and eating anything you like. Very wrong. AR will not only physically put you through the ringer, but emotionally and lessons in human relations. However these are the same people who you come to know almost better that your self, and they level on which you get is incredible.

So back to the lodge we go, obviously a lot quicker because we can glissade down the snow field. On the way somewhere between not talking to one another and hoping that we can make up time, get some good advice and we even talked about bumping into WEDALI who we knew were behind us. Back at the lodge all our dream came true, we got good advice, and bumped into WEDALI who were about to leave, so we joined forces again and off we went, this time over the next pass.

In the limited time we had spent at the lodge (both times) i had struck up a conversation with the owner Russell. We get to the correct pass (which was so much easier to descend down that the other one) was there with his cool retriever dog whose belly i had rubbed earlier and made me miss Cora our dog who love to have her belly rubbed. He greeted us again and handed me a beer. WOW awesome, i will save that for later. having a beer during a race isn’t always a bad idea. Not just for the end of the race.

We descended that pass with WEDALI traversed around this awesome semi frozen lake and headed to the next pass which was (after our day so far) aptly named the Devil’s range, which peaks named hell and everything related. By now it was getting dark and we were about to go over a pass in the dark with no climbing equipment. At point i would like to say there are several things in this race that a race director wouldn’t get away with in the USA. Either from an equipment or insurance perspective. Somewhat negligent in some 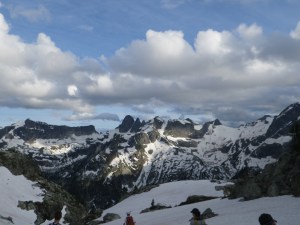 ways. All we had were our trekking polls (& they were optional gear) and that’s it, no helmet, ice axe, rope nothing. just what we had, going over several large mountain passes in the dark IN SNEEKERS!!!!! WOW. of course we had head lamps. but that only helps me see what going to hit me or where i am sliding out of control too.

Anyways we made it over this high pass, it was very cold up there, prehaps the coldest night of the race. Down the other side snapped one of my trekking poles. i still had one and that’s better than none.

by now i was starting to get to wicked hallucinations. These included thinking we were all on a camping trip with WEDALI. Then lower down the mountain on the way to the next TA bending over to pick up what i swore was a $20 bill lying on the road. Then placing my trekking poles on the ground and just leaving them there and carrying on down the road. Only to have Michelle pick them up and try to give them back to me with me responding that they weren’t mine but hers. Then claiming that there was a Tibetan restaurant ‘right down there on the left’ with free Tibet flags flying on the outside of the restaurant. hmmmmm gotta love adventure Racing. Then i can’t forget the HUGE Caribou we saw RUNNING towards us. Not far from the TA. This had a excited to see a large animal and completely freaked out as to which way it was going to go.

We were moving quite slow by now and WEDALI pushed on to the TA. We made a wrong turn and went about 1 hour out of our way. arrrggghhhh i hate it when that happens. We got to the TA 2 hrs later. To transition to our bikes. We were planning on sleeping here for a few hours, but felt the need to push on and skip the sleep. So we ate, and got ready to leave on our bikes. WEDALI were still there and they had taken the time to sleep. We still managed to leave the TA before them on our bikes, which was good. BUT!!!! we had skipped precious needed sleep they hadn’t.

I am running out of time and Robin and i leave for Colorado tomorrow. Will try to post one more report before we leave. But no promises. Will have to wait till we get back