Posted on August 10, 2011 by paulhumphreysadventures

This part of the report begins with us starting the lake paddle. This was expected to take between 3-5 hours and having had a few hours “sleep” we were feeling quite good. While it was still raining when we pushed off the shore the weather was improving. Peter with Chris and Me with Michelle. because i am the stronger paddler i often get to go with Michelle but that suits me, i like hanging out with her and we have a good time. We did get in a 2 canoe line with us at the rear so we could draft off each other.

There were 2 teams that set off about 20-30 minutes ahead of us and we soon found ourselves catching up to and over taking them. We were paddling well. This lake is in an old glacial formed valley and therefore all the lakes in this region are long and narrow. I heard that some were over 800ft deep. WOW.

The paddle passed relatively uneventfully with good time being made in perfect paddling conditions. We left the lake for a short paddle down a fast-moving river to the TA. We later heard that one team took 5 1/2 hours to complete the paddle. They had said no to taking sleep and paddling down the lake in the fierce rain and wind storm. No very smart, glad we took the rest so we could have better weather and a faster paddle. They said the waves were so big they had to paddle the shore line for fear of flipping. While we were able to paddle in a straight line.

We pass BRATS (UK Team) & a French team on the water. At the TA we prepped for what was the crux of the whole race the trek section through the famed Vahallas. A very remote mountain range in the Canadian Rockies. We heard more stories about this section during the reminder of the race and post pace than any other section and we too were about to embark on our own little adventure.

We got out of the TA in good time, about the same time as the French and slowly wound our way back up the lake this time obviously travelling on land, occasionally seeing the odd team padding towards us doing what we had been doing an hour or so earlier. After about an hour we turned inland up a valley crossing yet another “creek”- now raging torrent on continued snow melt. Thankful that we were crossing on a bridge. We trekked up the valley, on a trail at this point making our way to Lake Beatrice, passing several smaller just as beautiful lakes along the way. I was always struck by the volume of water in these creeks that would certainly sweep you away if you fell in or tried to cross. This also made me wonder just how much water was STILL flowing into these lakes!!!

We finally made it to Lake Beatrice after several hours, a little behind the French but ahead of Team BRATS. The trail ended at the lake and the race notes gave no indication of which way to traverse around the lake. While the left side was certainly shorter (as we could see where we need to go… UP) the right side of the lake looks like easier travel. So off we went us & BRATS, and the French electing to go the left side. This was prehaps the hardest travel of the entire race. We were moving at less than 1 mile an hour. As we climbed, jumped, crawled, skipped, shimmied, lunged…. insert adjective here__________ through the thick bush, forest and scrub. It was awful! i can only imagine the calories we were burning. Generally speaking we try to eat every hour to 90mins, but during the section we made sure we were eating every 45 minutes. At least the weather was good, but this is the mountains and anything can change. 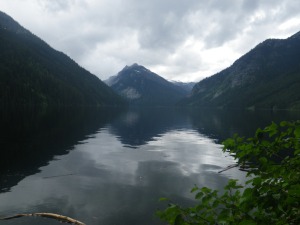 At times we were following another team bushwhacking then other times i think we were following animal trails that would end as soon as they begun. Namely Grizzly Bear, appropriately discovered by the large pile of  fresh poo we found. A few nervous moments, but hey what are you going to do. Say stop i want to go home. That’s one of the beauty’s of curses of Adventure Racing. You can stay “ok stop, i want to go home now” whenever you want to.

We kept traversing around the lake occasionally seeing the French across the large lake, thinking definitely chose the correct side. Only then to come around a corner and encounter a large, wide and fast-moving very cold river that needed to be crossed. Its early evening light is fading and we need to get out of here and at least make it up the side of that waterfall over there before we cannot see anything and get cliffed out. Get scenario huh.

Peter and i scouted up-stream quite a ways before we found what was the best solution. A slippery log, partially submerged on the other side by the fast-moving river. No way we would walk across this. So after some encouragement both teams started to scoot across one by one. Knowing the other side presented each of us with getting wet and potentially being swept away.

We ALL made it, a little wet, but made it.

By now it had rained several times and it was almost dark and we were wet and cold. However we did have our spirits raised by seeing a bald eagle check us out several times.

As we begun to scale the end of the valley i was very conscious of how cold i was. I have been cold in a race plenty of times, even to the point of shivering. However always ignored it because i know that as soon as i get moving i begin to generate some body heat and warm up… end of story. But this time i couldn’t get warm. Here we were on the side of some mountain going into our 3rd night with about 4-5 hours sleep and i couldn’t generate any body heat.

This saga ends with me, calling stop, i need to get warm, I’ve been cold before but not like this. The question is how does one get warm in this part of the world when its been raining. Easy you light a camp fire. No joke. The mountains are covered with these huge fir trees and they are so thick with branches and foliage etc that right at the base of the trunk its bone dry. Really it is. So we found  big tree gathered dry limbs from other nearby fir trees and lit a fire. Soon we had a raging fire and were warming up nicely. It appears i wasnt the only one with a case of the chills. We huddled in our e-blankets around the fire warming up whilst sharing and eating food. There were 2 teams present still, us and BRATS. After a few hours we were all sufficiently warm and packed up to continue climbing knowing that once we left the warmth of the fire we needed to move quickly to keep that heat.

As we continued climbing up the waterfall we looked over our heads and recall a sight i will never forget. As we looked down the long valley we saw 3 or 4 other ‘camp fires’ from other teams that had succumbed to the cold and needed to stop and warm up. It was humorous to think that here we were in the Canadian Rockies, miles from ANYWHERE and there were fires all up and down this valley like it was a local camping spot. We laughed.

We eventually topped out and continued to traverse around several smaller lakes eventually being greeted by the dawn. We approached one lake and traversed around the right side again. Only to realize soon that we should have gone left and avoided climbing up another (yet more intimidating waterfall) by now it was too late to turn back, we would lose too much time. And so we began climbing again. This waterfall was very intimidating, and while we were ever in or on it we were close enough to see it power.

After this dangerous climb we topped out to cross what was now a gentle-looking river to be greeted by snow again. We were high enough to be back in the snow. At this point i should mention that there were several times in this race where I feel as though we did things that were bordering on dangerous and even negligent. Consider what little equipment we had to do what we did. There were a one or two other instances in the race later on.

We continued to climb and eventually made it to the next TA. The Ice Creek Lodge. http://www.icecreeklodge.com/ It was an oasis in the middle of no-where. So much no-where that there are no roads in here. you either hike in or take a helicopter. We were greeted with great hospitality and warm soup. This was the first TA where i was really tempted to stay ‘a little longer’. The last section was no joke and had shaken our nerve a little. But the Vahallas weren’t done with us yet. We still had to cross 2 high mountain passes but for now we were resting at the lodge. We stayed for about 1 hour, catching about 20mins of sleep before venturing out again. It was mid afternoon when we arrived there.

Thanks for continuing to read these reports.